1.CONCEPT
The Project starts from the analysis of the physical and social nature of Singapore, that is a country-city lying on an Archipelago of 63 islands and a cultural result of the fusion of many folks. The new sustainable bamboo Village, for that reason, consists of an Archipelago of volumes, among which stands out the Skyscraper. They all spread around a water Core, the Marina, calling back the close Marina Bay, in the Downtown Core.

2.MASTERPLAN
The Masterplan is a configuration of many “functional islands”, settled around a central Core. The main volume, the Skyscraper, hosts the functions required from the program, while the other ones, lower and on the same level of the street, are the shell of ricreational spaces, sport facilities, educational structures, theaters and cinema. They overlook a central courtyard that consists in a small Marina, accessible from the Kallang River by a new waterway. Along the edge of the site there are gardens on the same level of the surrounding areas. Underneath the gardens, are placed underground parking, technical rooms, storages and support facilities of the infrastructural nodes. All the buildings are linked on more levels by plates that host the main routes, the squares, the shopping terraces, and the pier of the inner harbour. They have been designed for cycle-pedestrian flows but they can be crossed also by electric vehicles, or by shuttles.
The main access are: from East, by the Nicoll Highway Station; from North, by the Nicoll Highway, through pedestrian entrances; from West, through the new link to the Ophir Road and the Suntec City; from South, by the new infrastructural node between the Project and the ECP, from Republic Avenue; from South-East, by a new cycle-pedestrian path and the new water way to Marina Park and Kallang River. The main routes are the structural axes of the entire Project that link the main access to the Village, flowing toward the Core, where there is the access to the Skyscraper. Buildings and pathways are designed to allow the visual connections from the plates to the main landmarks of Singapore: The Flyer, Marina Park and the other surrounding buildings. 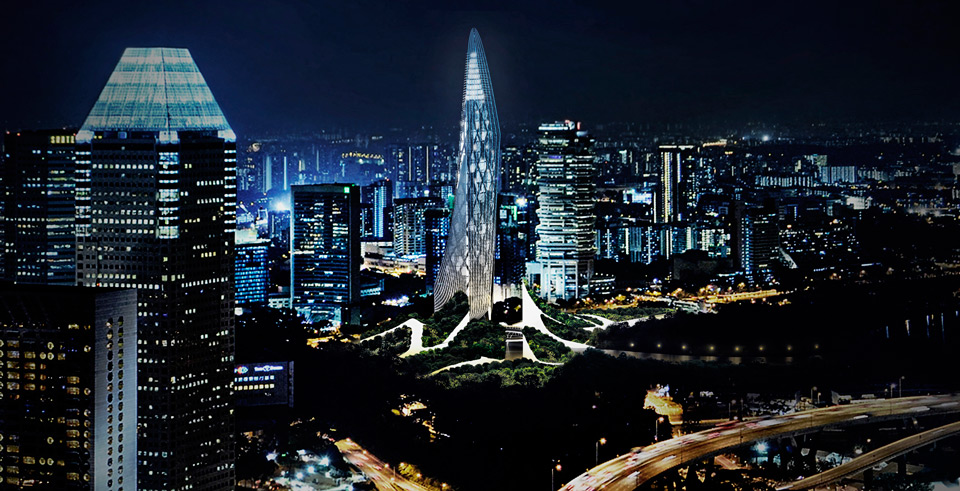 3.CELLULA
The Skyscraper consists in two concentric structural cylinders joined together by horizontal rings; inside this steel structure, independent self-supporting CELLS, made by a structural net of bamboo, are inserted. Each level of the building is design as a continuous tunnel, along which the CELLS are combined through the horizontal rings, assuming different configuration. The different assembly combination allows the design to achieve different and flexible spaces, depending on the function to allocate. Each CELL is easily replaceable in case of deterioration over time: this is done through a system of vertical movement within the central structural cylinder. The spaces thus defined are finished with removable bamboo paneling that facilitate the maintenance of the building and facilities, and are divided by movable partitions, adaptable to changing needs.
The Skyscraper is then covered with a double skin of glass and shading elements of bamboo, creating an air space for insulation and natural ventilation. The Skyscraper is composed for the most part from bamboo, in the form of structural CELLS and finishing, from a reduced percentage of steel, as a strictly necessary skeleton, and from a small part of glass.

4.TECNOLOGIA E BIOCLIMATICA
Two steel cylinders tied together by horizontal rings are the main structure of the Skyscraper and create the backbone and the housings for the CELLS. In each level they lay one beside the other, combined or separated depending on the spaces to configure, creating a continuous «tunnel».
The cell is designed as a hollow section of the tunnel, dimensioned to be able to be transported vertically through the internal structural cylinder, facilitating the assembly and the possible replacement. The Skyscraper is accessible from the cycle-pedestrian plates and through a navigable inland port, inside a large green Cave. It creates a large reservoir of fresh and humid air just below the warmer ventilation channels through the buffer zone and along the internal structural cylinder; the difference of pressure and the narrowing of the channels trigger natural ventilation. 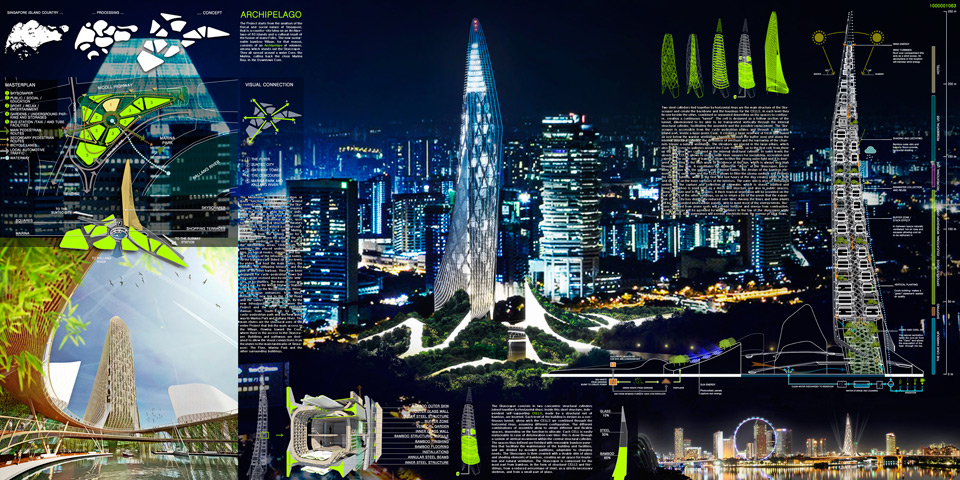