The form of the skyscraper is reminiscent of hills where the highest point is placed where the widest floor plan of the property is. This hill creates a certain differentiation between the strict shapes of the skyscrapers, which expresses its material, and conceptual difference. While thinking of the form we clearly refuse all formal shapes and tried to turn towards simplicity even to a primitive natural form. This natural form enables air to flow and at the same time allows for the natural circulation of communication on the contours. This communication ramp curves around the whole skyscraper and connects the individually functioning nodes of the building. There is also another type of communication vertically. These communication cores were always placed in the centre of a certain area; Since the whole form is based on the gradual liberation of the space from the middle into the edge of the building, we decided to lighten the edges of each floor with holes of various sizes and shapes. These holes also enable natural light in the deeper parts of the dispositions.

More stable and thicker construction was placed in the most burdened space. We therefore decided to build a skyscraper from wood based on the same system, which is the most natural for use with this building material. The columns were organised according to their width with the widest columns at the most burdened places while the others narrow leading out to the borders. This principle allowed us to easily organise the whole interior space. 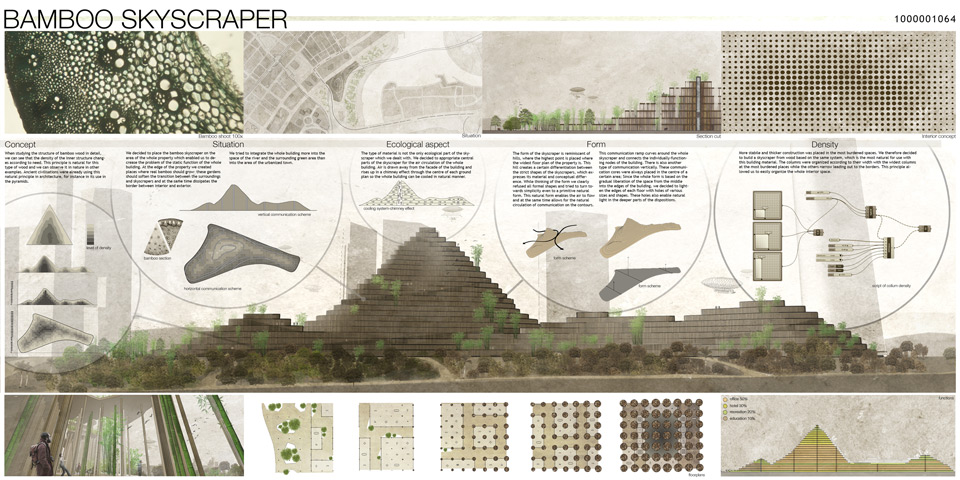