The Bamboo Skyscraper was conceived as a section of a city that was flipped vertically. The major streets become the shafts, and the stores along those streets become the various programs at different levels. Like a street, these shafts house the major circulation and service armatures of city.

The building was situated on site to straddle the existing subway line and be encircled by the major roads. The building is raised off the ground to creating a free plan, allowing for circulation both horizontally and vertically.

The Bamboo Skyscraper is composed of one modular unit called the Tectonic Unit. This Tectonic unit is made from steam bent and arrayed bamboo stalks. As a result, each Tectonic Unit provides the floor, ceiling, vertical circulation, and access to the vertical circulation. These Tectonic Units make up floor slabs that can vary in three dimensions, optimizing each slab for the assigned program. Each program group is separated by a Skypark.

Structurally, the Bamboo Skyscraper has two pieces: the Tectonic Unit and vertical tubes within the Tectonic Unit for lateral bracing. The Bamboo stalks are connected together to form these two components using basic steel brackets. The result is a moment frame that works similarly to a concrete and steel moment frame.

Sustainability is inherent in the building design simply because it is made from bamboo. On a well managed 1000 hectare plantation, it would take 2 years to grow the amount of bamboo required to make this skyscraper. Further, the distributed organization of the circulation tubes allow them to contain sustainable functions like: water filtration for grey water use, stack effect for washroom ventilation, mist sprinkler system for fire protection.

Overall, the Bamboo Skyscraper is an extremely sustainable and renewable model for a flexible mixed use tower.­­­ 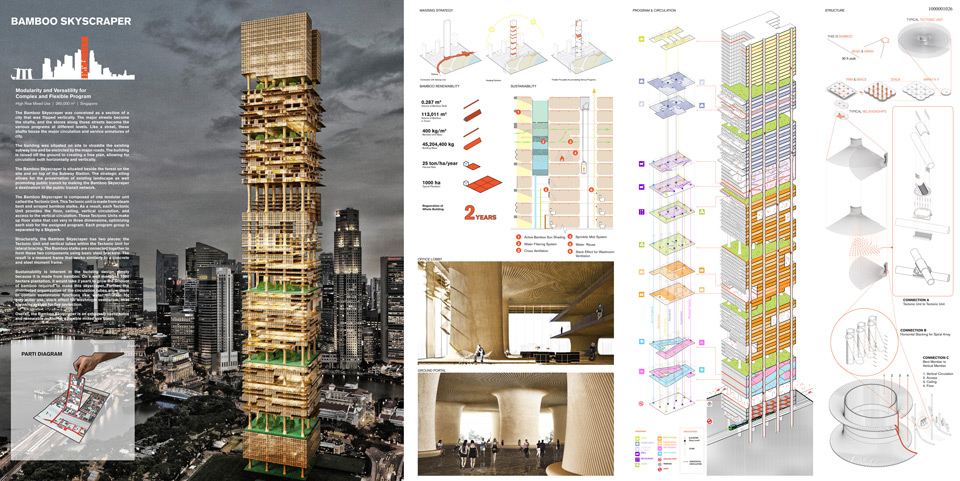